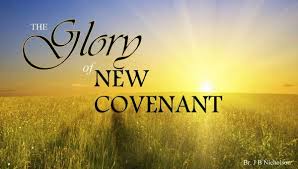 In our zeal to know the Lord and seek his Kingdom; it is easy to fall into a servant- mentality and become works-based. Honestly, I have done this so many times but, our New Covenant is one of “Rest”. We rest in faith that Jesus did all the work required and now that the righteousness of the Old Covenant is fulfilled in us (instead of by us) so we can freely receive grace and all that we have already been given because of his love for us!

I believe John details the New Covenant more clearly than any of the other 3 writers, which were written much earlier. The first 3 were written approximately ~ Matt (49AD), Mark (64 AD) and Luke ( 60AD) but John wasn’t written until around 90 AD! (Which seems to be the only one written after the New Covenant is fully established in 70AD)

John may have written his account after he walked with the Lord another 40 years longer than Matthew! Take into consideration that John was considerably closer to Jesus when he was alive and it could be very possible that John was like the wise, faithful steward with 10 talents that was given 10 more. Matthew was given a few chapters detailing the “Last Days” but John was given “The Revelation of Jesus Christ” which is 22 chapters! I just now realized that John was given about 10 times as many “chapters” of revelation concerning “the last days”!

Consider some of the promises of “The New Covenant” according to John based on simply “believing” which is John’s “Key Word” that he used almost 100 times. Contrast that with Matthew; who recorded in great detail all that the Jews had to do to “earn” the Kingdom…

“18Whoever believes in him is not condemned, but whoever does not believe is condemned already, because he has not believed in the name of the only Son of God. “ ~ John 3

“21But whoever does what is true comes to the light, so that it may be clearly seen that his works have been carried out in God” ~ John 3

24Truly, truly, I say to you, whoever hears my word and believes him who sent me has eternal life. He does not come into judgment, but has passed from death to life. ~ John 5

35Jesus said to them, “I am the bread of life; whoever comes to me shall not hunger, and whoever believes in me shall never thirst. ~ John 6

“If anyone thirsts, let him come to me and drink. 38Whoever believes in me, asf the Scripture has said, ‘Out of his heart will flow rivers of living water.’” 39Now this he said about the Spirit, whom those who believed in him were to receive” ~ John 7

“I am the light of the world. Whoever follows me will not walk in darkness, but will have the light of life.” ~ John 8:12

14I am the good shepherd. I know my own and my own know me…27My sheep hear my voice, and I know them, and they follow me. 28I give them eternal life, and they will never perish” ~ John 10

That’s not even getting into John 14-17, which is FULL of New Covenant promises that Matt, Mark and Luke didn’t even touch! These 4 chapters are all a gold-mind of our life in Christ already given!